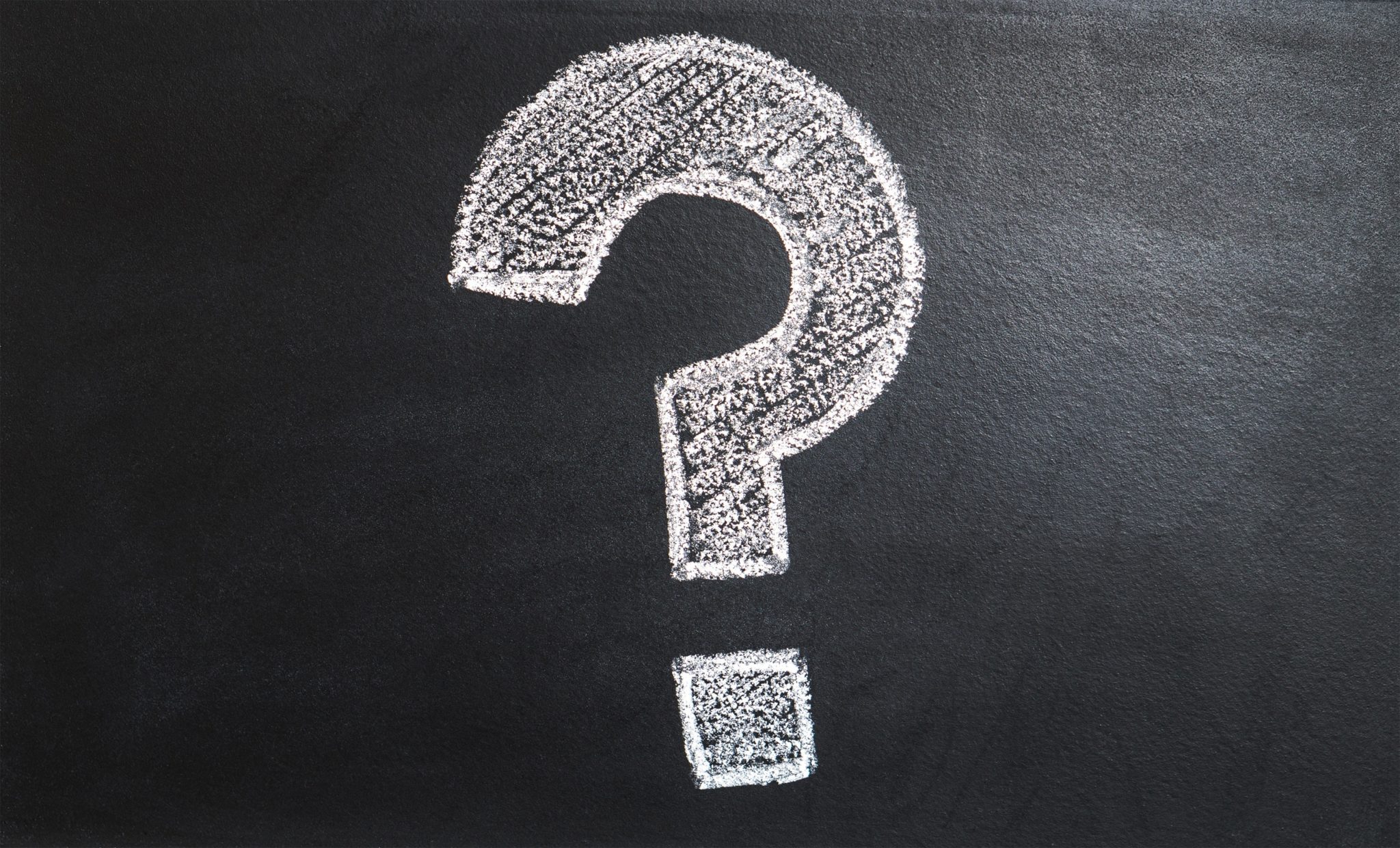 Does Gold Belong In Your Portfolio? Ask Me Anything – Fall Edition

You guys asked for it –  here are some more questions you all have been asking me this month.

Just try not to panic too much.  The president can impact stock returns through their direct actions from time to time (see the current trade war), but it’s usually a lot less than you think. 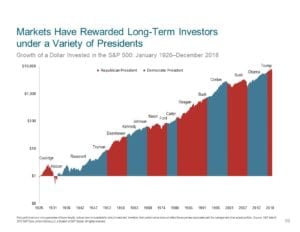 The average return for the stock market during a presidential term regardless of party going back to Hoover?  9.9%.  Even though presidents like to tout job growth, GDP increases, and the unemployment rate dropping under their watch this usually has more to do with where we are in the business cycle than anything.  Presidents get too much credit for economic growth and take too much blame for their contractions. 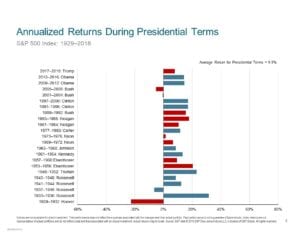 You want know the best way to show big stock market returns during your presidency?  Inherit a terrible economy at the end of a bear market (see Regan, Obama).  The business cycle bottoming and then improving usually takes care of the rest.  Conversely, some of the worst returns come when a president inherits a booming economy.  George W. Bush, despite implementing pro-market legislation like cutting taxes and increasing spending on the expansion of health care and military, happened to be in office during the dot-com bust, 9/11, and the housing crisis.

The next president will have some impact on the direction of the stock market but it’s just one small part of the myriad of reasons that stocks go up or down.  Try not to soley base your investing decisions by who might win.

What’s the best way to invest a cash balance?  Dollar cost average over time or as a lump sum all at once?

If you go soley by the data – you should invest as a lump sum every time.   Why?  Becuase the stock market is up on the average of 3 out of every 4 calendar years.  So if you dollar cost average smaller amounts over time odds are you will be investing at higher prices as the general direction of the stock market is usually up.  Want to take that a step further?  Nick Maggiulli has been doing a ton of great work on the subject on his blog Of Dollars and Data 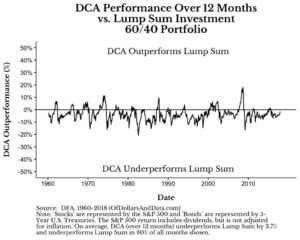 He went back and looked at how a lump sum strategy vs. a monthly dollar cost average into a balanced 60/40 portfolio performed back to 1960.

“What you will notice is that DCA underperforms Lump Sum 80% of the time, but there are still a handful of periods where DCA outperforms.  The most notable outperformance occurred 12 months before the bottom in March 2009.  This makes sense because DCA beats Lump Sum when buying into a falling market (as I mentioned above).

However, you will also notice that immediately after the March 2009 bottom, Lump Sum immediately starts outperforming DCA again.  This occurs because the market changes from a falling market to a rising market at the exact bottom (March 2009).  It is at this exact inflection point that Lump Sum regains its advantage over DCA.”

I’d encourage you to read the rest of the post here as he shares even more reasons why lump sum investing is almost always better.   BUT…

Let’s say you happen to be one of the unlucky ones who invests at a market peak in times like 2007, 1999 etc. and you find your portfolio down 10, 20, or even 30%.  We know the general direction of the market is up, but would you panic?  Kick yourself?  Sell and get defensive?  If so, you may want to consider dollar cost averaging smaller amounts over time just for the emotional factor.  It’s important to go over your risk tolerance, time horizon, and other factors before making your decision.

Is gold a good investment?

Gold has been in the news a bit lately as it’s had a great run this year and has been mentioned by a few prominent investment managers like Ray Dalio as something they are investing in.   Let’s talk about the positives and negatives about investing in gold.

*I’m talking about gold as an investment in your portfolio here, not buying some physical gold coins and putting them in a safe.  If you want to do that as a way to help you sleep at night as a hedge against an economic meltdown or zombie apocalypse then go for it.

Gold has little to no intrinsic value.

What do I mean by that?  It’s not the kind of asset class you can value like stocks or bonds.  Why?  Because gold does not generate earnings, dividends, cash flow, or interest.  It is worth what someone is willing to pay you for it, that’s it.  Warren Buffett has had a couple great quotes on his views of gold over the years:

“Gold gets dug out of the ground in Africa, or someplace. Then we melt it down, dig another hole, bury it again and pay people to stand around guarding it. It has no utility. Anyone watching from Mars would be scratching their head.”

“The problem with commodities is that you are betting on what someone else would pay for them in six months. The commodity itself isn’t going to do anything for you….it is an entirely different game to buy a lump of something and hope that somebody else pays you more for that lump two years from now than it is to buy something that you expect to produce income for you over time.”

You can buy AT&T stock and it can just sit there for decades but at least pay you a dividend while you hold it.  Gold just…is.

Gold is a fairly uncorrelated investment to stocks and bonds.  You want some asset classes to zig when others zag to maximize the diversification in your portfolio.   Gold fits that bill.

There are also environments where gold prices can increase significantly.  Demand for gold can spike during times of fear, uncertainty, rising inflation, and other factors.  Gold can also go through periods of great outperformance vs. stocks and bonds (see 1970’s and 2000’s).

Right now, the price of gold is rising due in large part to the amount of negative yielding government bonds around the world.  It’s crazy to think, but gold (with an interest rate of zero) has a higher interest rate than 17 trillion dollars worth of negative yielding government bonds trading around the world right now.  If rates stay like this and eventually we start dropping money out of a helicopter to produce inflation then I can see owning some gold as a way to protect your purchasing power.

Gold is best viewed as a trade, not an investment

I think gold is a reasonable asset to own for the reasons mentioned above as long as you also have a sell discipline.  But, if you are planning just to own a slug of it forever hoping for annualized growth similar to what you would do with a blue chip stock or index fund I’d think twice about doing that.

What’s with all of the shark sightings lately?

If you’ve been around the beach in Southern California this summer you’ve probably heard about all of the shark sightings.  It seems like we’ve been seeing videos like these all summer:

I know a lot of people that blame the proliferation of social media, surf cameras, and drone spotters as the reason there have been so many sightings lately.  There have always been sharks, we now have the means to capture them on film.  That said, talk to any hardcore surfer and they’ll tell you how many people that have seen sharks this summer for the first time (I can think of 8 off the top of my head).  Is this just a coincidence or are there really more sharks in the water than normal?

There is a UCSD study going on right now tracking some of the population so I’ll leave it up to the experts to try to explain the answer to that question.  All of the sightings this year seem to involve juvenile great white sharks and so far none of them have been aggressive to humans.  For now I’ll continue to surf – albeit with my feet out of the water a bit more than usual.

Got a question for the next ask me anything?  Send your questions to:

Will Social Security Be Around When I Retire?