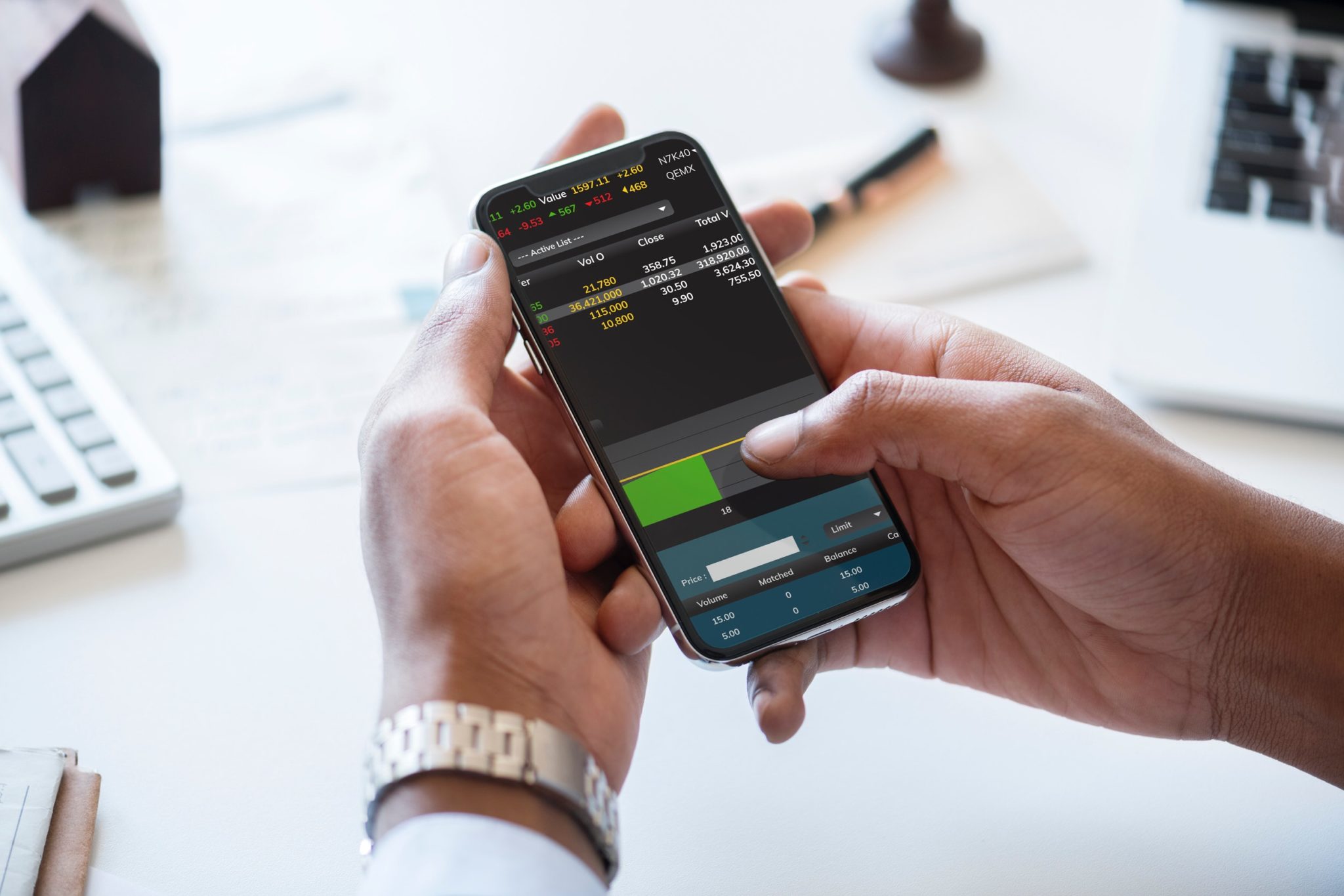 How To Outperform A Wall Street Pro

“Let me tell you the story of two investors, neither of whom knew each other, but whose paths crossed in an interesting way.

Grace Groner was orphaned at age 12. She never married. She never had kids. She never drove a car. She lived most of her life alone in a one-bedroom house and worked her whole career as a secretary. She was, by all accounts, a lovely lady. But she lived a humble and quiet life. That made the $7 million she left to charity after her death in 2010 at age 100 all the more confusing. People who knew her asked: Where did Grace get all that money?

But there was no secret. There was no inheritance. Grace took humble savings from a meager salary and enjoyed eighty years of hands-off compounding in the stock market. That was it.

Richard Fuscone, former vice chairman of Merrill Lynch’s Latin America division, declared personal bankruptcy, fighting off foreclosure on two homes, one of which was nearly 20,000 square feet and had a $66,000 a month mortgage. Fuscone was the opposite of Grace Groner; educated at Harvard and University of Chicago, he became so successful in the investment industry that he retired in his 40s to “pursue personal and charitable interests.” But heavy borrowing and illiquid investments did him in. The same year Grace Goner left a veritable fortune to charity, Richard stood before a bankruptcy judge and declared: “I have been devastated by the financial crisis … The only source of liquidity is whatever my wife is able to sell in terms of personal furnishings.”

The purpose of these stories is not to say you should be like Grace and avoid being like Richard. It’s to point out that there is no other field where these stories are even possible.

In what other field does someone with no education, no relevant experience, no resources, and no connections vastly outperform someone with the best education, the most relevant experiences, the best resources and the best connections? There will never be a story of a Grace Groner performing heart surgery better than a Harvard-trained cardiologist. Or building a faster chip than Apple’s engineers. Unthinkable.

But these stories happen in investing.”

This is a snippet from Morgan Housel’s incredible article from last year called The Psychology of Money.   I’d urge all of you to read it as he gets into some of the biases we all succumb to when it comes to our finances.   As he says later,”…investing is not the study of finance.  It’s the study of how people behave with money”.  It’s true.  So much about investing is about behavior, not returns.   If you can control your actions (or more precisely, not acting much at all) you can set yourself up for long term investing success like Grace did.  Let’s talk about how you can give yourself some mental ammunition to stick with a long term investment plan:

I see that I don’t need a degree from Harvard to have just as much opportunity to make money over time like Grace did but I keep reading about what’s going on in Washington / the debt spiraling out of control / the threat of an upcoming recession etc. and I don’t want to invest right now.

I get it, there is bad news out there and it seems like it’s constant.  But what’s the famous saying…economists have predicted 9 of the last 5 recessions?  We are terrible at predicting these kinds of things in advance.  See below to look at some of the eye-grabbing headlines along with the gains you missed out on if you listened and stayed on the sidelines:

But that’s just the last few years since the bull market started.  What about before that? 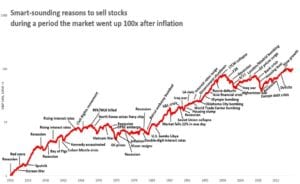 So you’re telling me just to invest and forget about it?  How good of a strategy is that?  By that rationale you’re essentially saying a dead person can outperform a well informed investor.

Well now that you mention it….

Ha ha.  I can see that stocks generally go up over time and it seems like the more you can ignore the news the better.  Can you tell me how often stocks are up vs. down?

Hold a stock 1 day?  It’s a basically a coin flip.  Your odds get much, much better the longer you hold on.  I’d argue most of you reading this have longer than a ten year time horizon.  If you’re investing in a retirement account and can’t access the funds for a decade or longer,  I’d say the odds are good that you’ll do well over time. 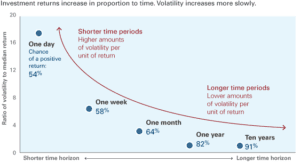 OK, but how well?

Nothing is guaranteed, but you can look at historical returns for different time periods going back to 1872 here:

Source: The Measure of a Plan via Ritholtz.com

Notice the lack of red down years after you hit a 20 year holding period?  That sounds like a long time but if you are my age and have most of your funds in retirement accounts that’s pretty much your time horizon.

But it seems like we have all of this bad new coming out all of the time, how is it that stocks generally keep going up?

It’s not rigged, but I get why people don’t understand or trust it.  Essentially, when you buy a stock you are purchasing an ownership stake in that company.  The sole purpose of that company is to grow its profits and invest those profits in the best interest of the owners – you.  That company is also continuously trying to innovate its products and services to keep up with the competition nipping at its heels.  Multiply that by thousands of businesses trying to grow and expand and compete against each other and you get continuous improvements in products that we want to buy and services we want to use.  When we buy/use them that grows the earnings of those stocks and their stock prices.   Multiply that again by millions upon millions of investors who are also looking to grow their incomes and improve the lives of their families willing to work for a better future and you get the idea.   You can also look at the pure numbers behind this here.

OK, I can see the market has a history of going up over a long enough time frame.  The article never mentioned what she invested in or what her rate of return was.

True, but it did mention that she invested her savings.  Believe it or not, how much you save has much more impact on your future financial success than your rate of return in the market.  Investment returns are important but your savings is more so.  If there’s one common misconception I could relay to investors is that they are typically more focused on their returns, not their rate of savings.  It should be the opposite.

This is a chart of a couple making $150,000 with various savings rates on the left and different investment returns.  From Thor Investment Management – “As an example of the disparity and impact between savings rate and investment returns, take the 1% savings rate and 10% annual return scenario in the top right hand corner of the chart.  In 30 years, you end up with $246,741.  In comparison, at a 5% savings rate you need a whopping 1% return to achieve a higher future value of $260,887.”  Interesting, right?

Plus, unlike what the Fed does, what happens in Washington, or any number of things that might have an affect on your rate of return, your savings rate is something you can actually control.

You know where I was going with this.  Schedule a time to chat here!

How to Prepare for Higher Interest Rates