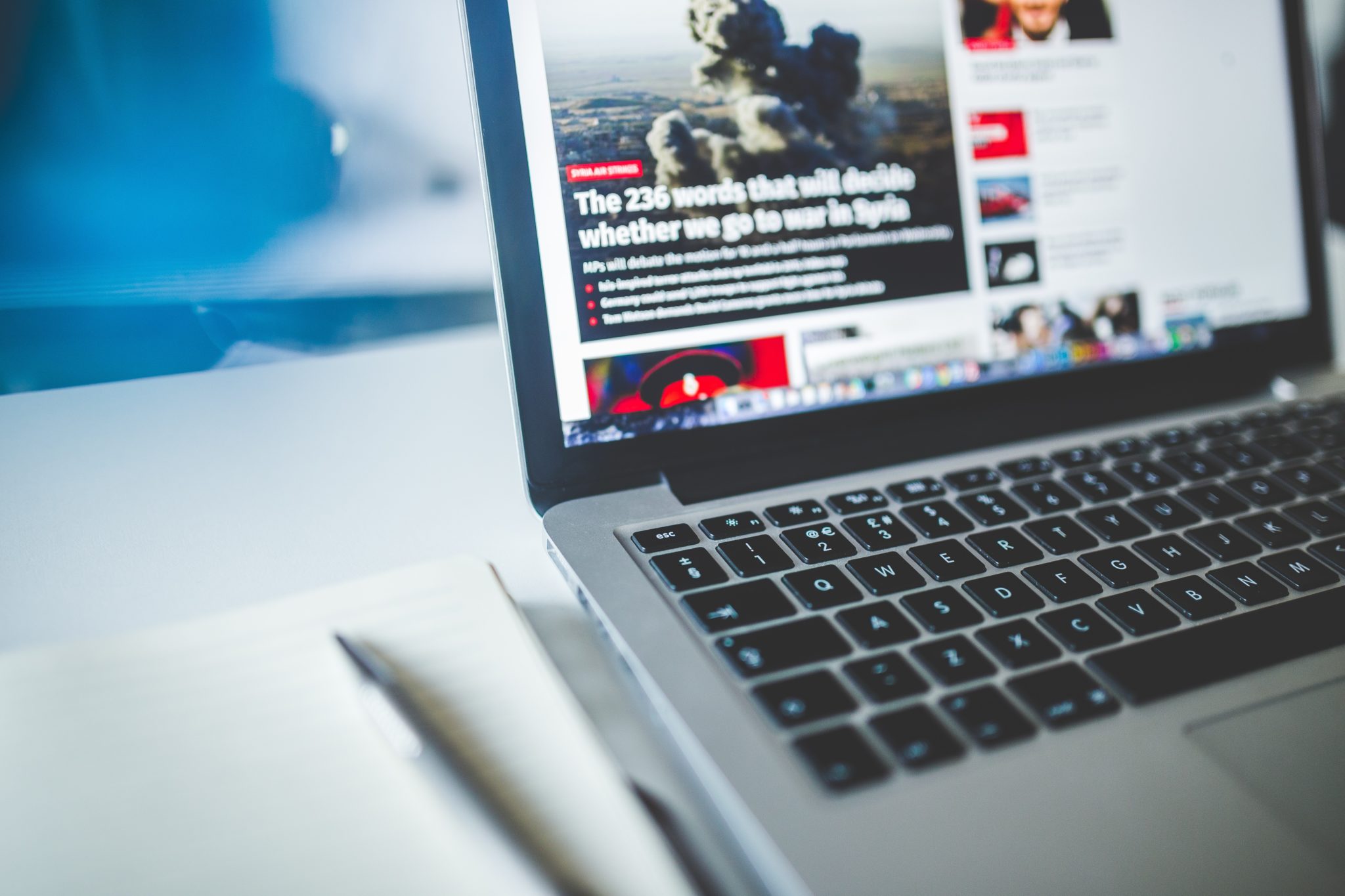 US Stocks Sre Closing in on an Ominous Record. The Most Expensive on Record.

It feels like we’re so close to getting back to normal.  Most of the kids in San Diego County are back to school, the commute is starting to get busy again, and the Padres are closing in on another season without playing meaningful games into October (sigh).

Yet, we’re now dealing with the resurgence of COIVD via the Delta variant which we will have to deal with as we get into the fall.  The stock market rose despite these COVID concerns, concluding with a big up day last Friday following bullish comments by Fed Chairman Jerome Powell.  It’s beginning to sound like a broken record – another month, another all-time high.

The seemingly non-stop rise of the US stock market remains something to behold.   The S&P 500 has gone over 200 trading day without a 5% correction.  Look at the chart below from JP Morgan to put this move in perspective: 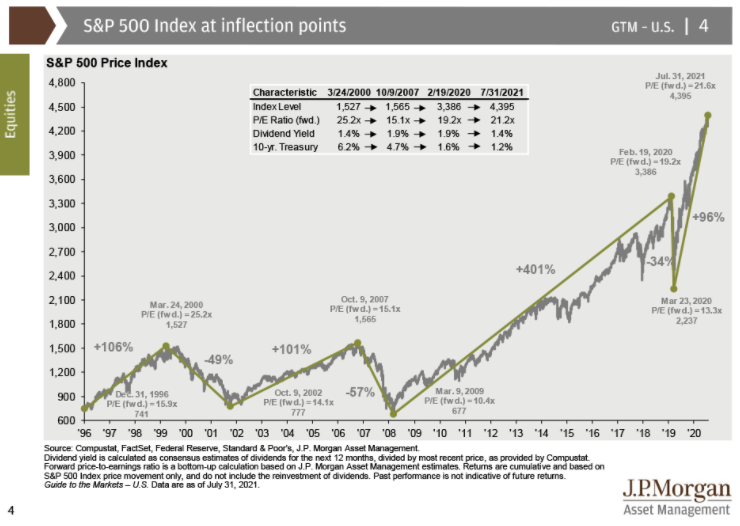 One of the most remarkable things about this move is that most US indices are well above their pre-pandemic high. 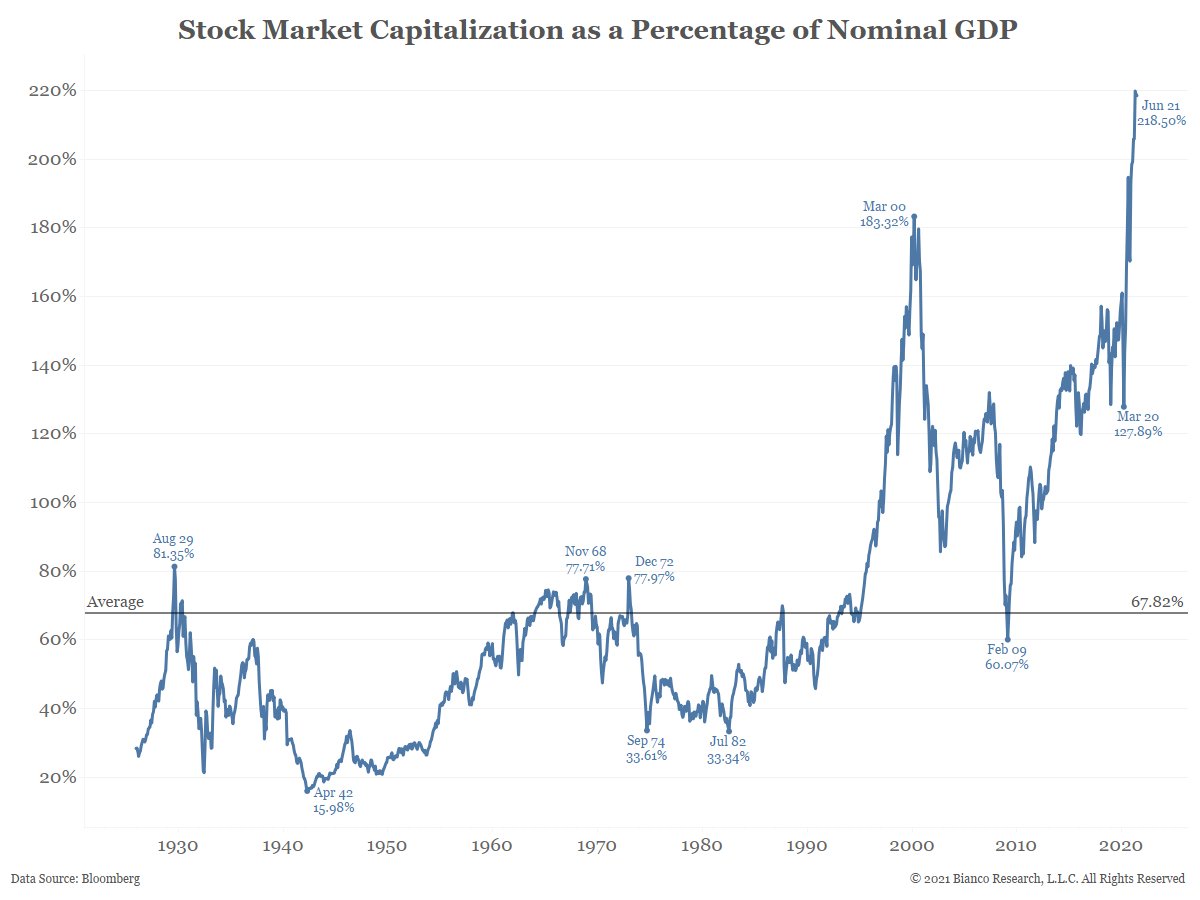 Is it possible that the stock market is correctly anticipating a post-pandemic world that is that much better than what we were in pre-COVID?  Or have we gotten ahead of ourselves and are now left to navigate the inevitable pullback from the second most expensive stock market in history?

It’s hard to ignore the latter scenario.  The Fed has done everything they can to try to get back to full employment from the jobs that were lost during the initial COVID shutdowns.  I’m not sure what else they can do on this front as there are now more jobs open than at any point in history.  There are also currently 8.7 million people currently unemployed.  Yes, there are more open jobs available in the United States than people looking for them. 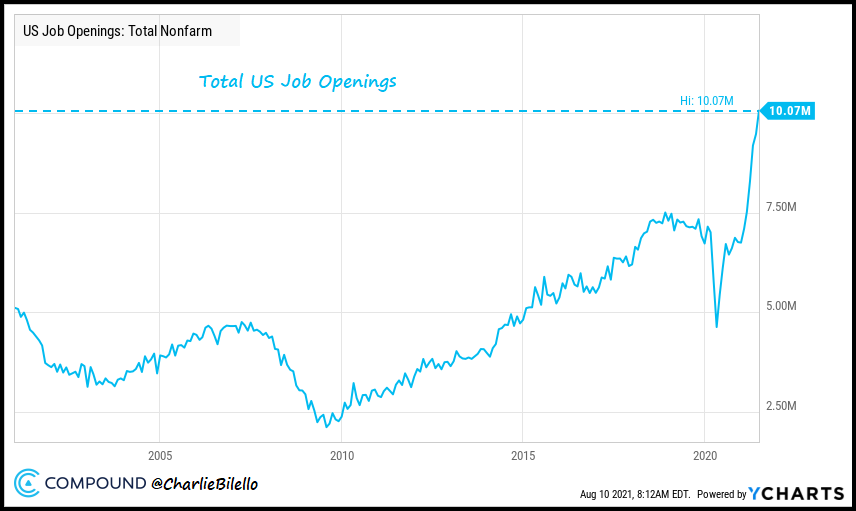 The Fed has also indicated, despite anticipating pulling back on the bond purchases they’ve been doing to add liquidity to the financial system, that this doesn’t mean that we should anticipate interest rates rising anytime soon.  This continued liquidity, persistent low interest rates, and general bullishness in the economy are factors causing some downright incredible activity in things like cryptocurrencies and NFT’s.

In case you hadn’t heard about the most recent NFT craze this month, you may want to sit down.  The JPEG below is of a collection of non-fungible tokens called EtherRock‘s.  Yes, pet rocks available on the blockchain that are unique in that there can only be one owner of each.  There will also only be 100 created.  Even though you can literally just *command C *command *V the picture, someone spent roughly $1.3 million of the cryptocurrency Ether on it a week ago. 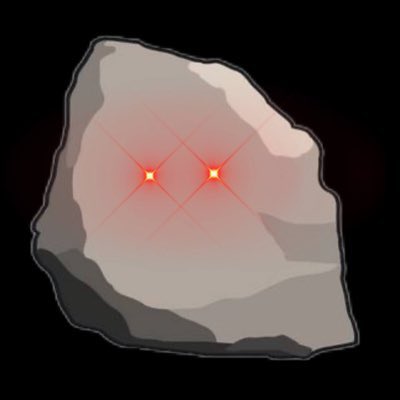 People Are Paying Millions of Dollars for Digital Pictures of Rocks

Another set of NFT’s called CryptoPunks are also all the rage right now.  Visa even bought the one below for roughly $150,000 this month. If you want to get involved in CryptoPunks, you’ll have to pony up almost $300k for the cheapest one.  And if all of this is surprising to you, you may want to lay down for this one.  A 12 year old has earned almost $400,000 selling NFT’s this year.

Could this have happened without zero interest rates and all of the federal stimulus pumped into the system?  Perhaps, but unlikely.  There are plenty of reasons to be wary of these behaviors and the overall high valuations in the US stock market.  But that doesn’t mean it can’t continue.

Stock prices are meant to rise when earnings increase, and earnings are beating estimates by the highest rates on record. 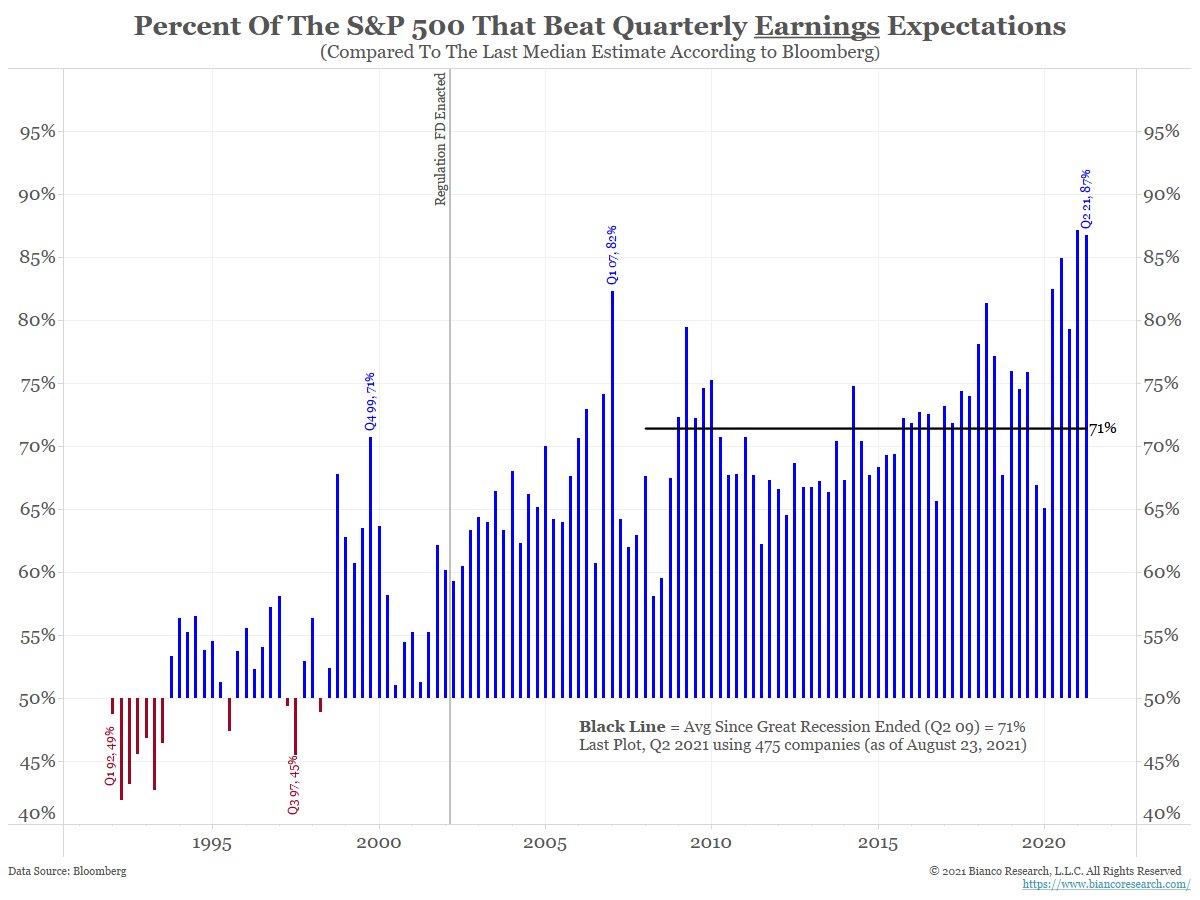 “Bottom line, companies have delivered earnings like a .300+ hitter with 35+ hrs. But you’re paying that hitter $35m+/yr (record salary). Good for now. But will this hitter earn its pay next year, and the year after?”

It stands to reason that these all-time high valuations in the stock market are justified with record earnings and historically low interest rates.    Only one more milestone to go:

Should you invest in cryptocurrencies?