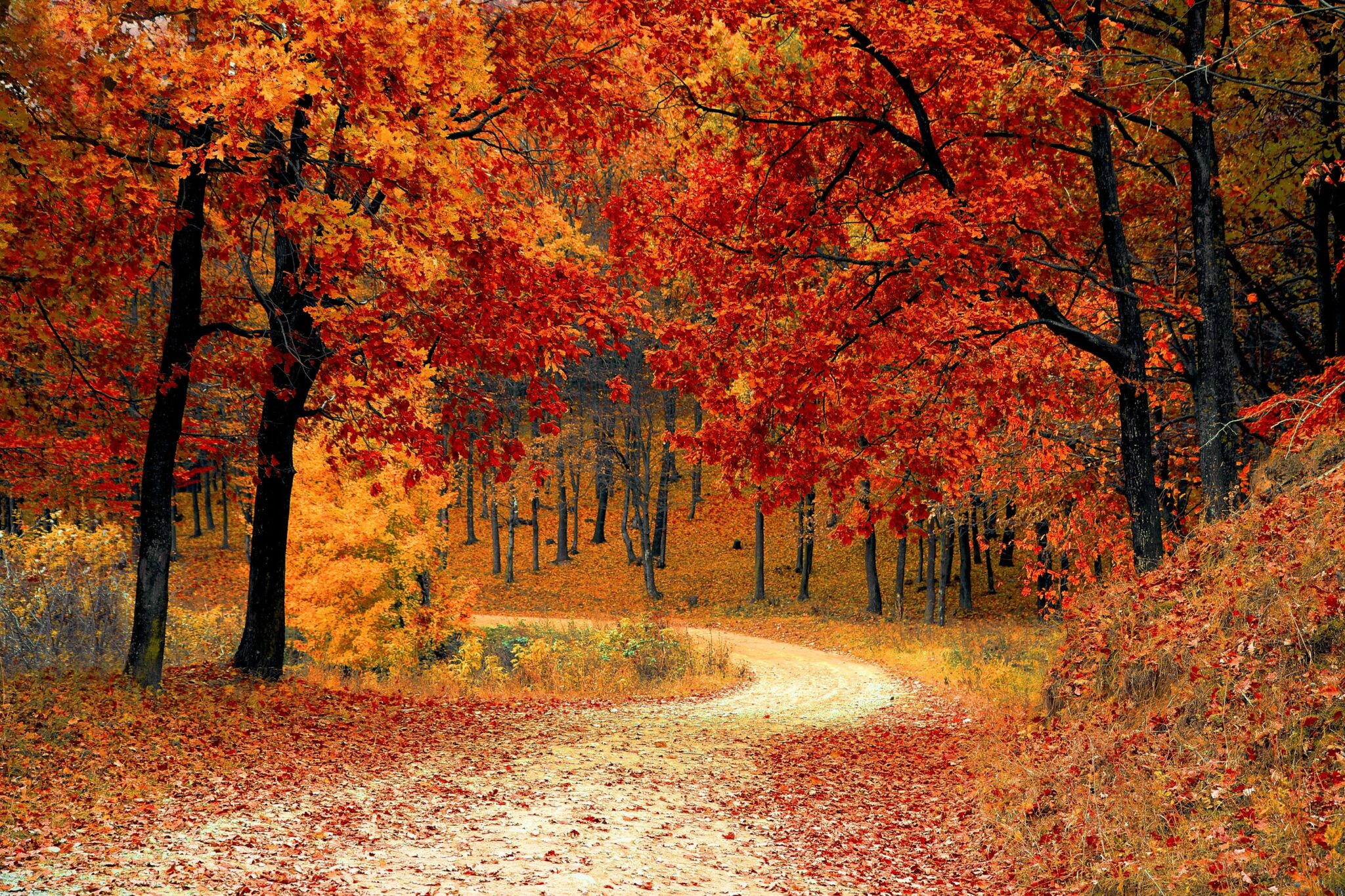 When Will This End?

The band Green Day’s song “Wake Me Up When September Ends” came on in a restaurant in Encinitas last week.  In hindsight, I think most investors would want to sign up for that.  It was an awful month in the markets.

We had just started to regain some optimism after a summertime rally, only to reverse back to lows on the year.  What happened?  Jerome Powell and the Fed.  From the meeting earlier this month:

“Price stability is the responsibility of the Federal Reserve and serves as the bedrock of our economy. Without price stability, the economy does not work for anyone. In particular, without price stability, we will not achieve a sustained period of strong labor market conditions that benefit all … We will keep at it until we are confident the job is done … Restoring price stability will likely require maintaining a restrictive policy stance for some time.”

After the September fed meeting it became clear to most that not only are interest rates going higher, they’re going to be higher than most expected for much longer until inflation comes down.  The Fed seems hellbent on, not only bringing down inflation, but creating some job losses as well.  Think about that for a moment – the most powerful central bank in the world made such a blunder in forecasting inflation that they want to drive millions of people out of work to correct their mistake.

This is wreaking havoc on an already fragile market, and we do seem to be on the verge of something seriously going wrong.  Let’s get the bad news out of the way first:

This is the fastest rate hiking cycle in over 40 years.

“They were figuring 0% through the end of 2022 with a 50-basis point hike in 2023.  Obviously, the Fed did not assume we would see inflation rise to 9% this year (neither did I).  But the Fed Funds rate is now at 3.25%.  They have raised rates 75 basis points at the last 3 meetings.  Those two rate hikes are higher than the forecast for rates to rise for the entirety of 2023!”

What is the Fed Doing?

The rise in interest rates is now starting to show in the financial system.  Mortgage rates topped 7% (!!!!) this week.  Housing as a percentage of income just reached the highest since 2006 (and you know what happened after that).

Federal Express, a fair barometer of the health of businesses, warned it will miss earnings estimates and their CEO thinks the economy is entering a global recession.

Speaking of the global economy, most major currencies have been wrecked vs. the US dollar.  This is going to make it tough for just about any country transacting in dollars.   The British Pound reached a new low vs. the dollar this week. 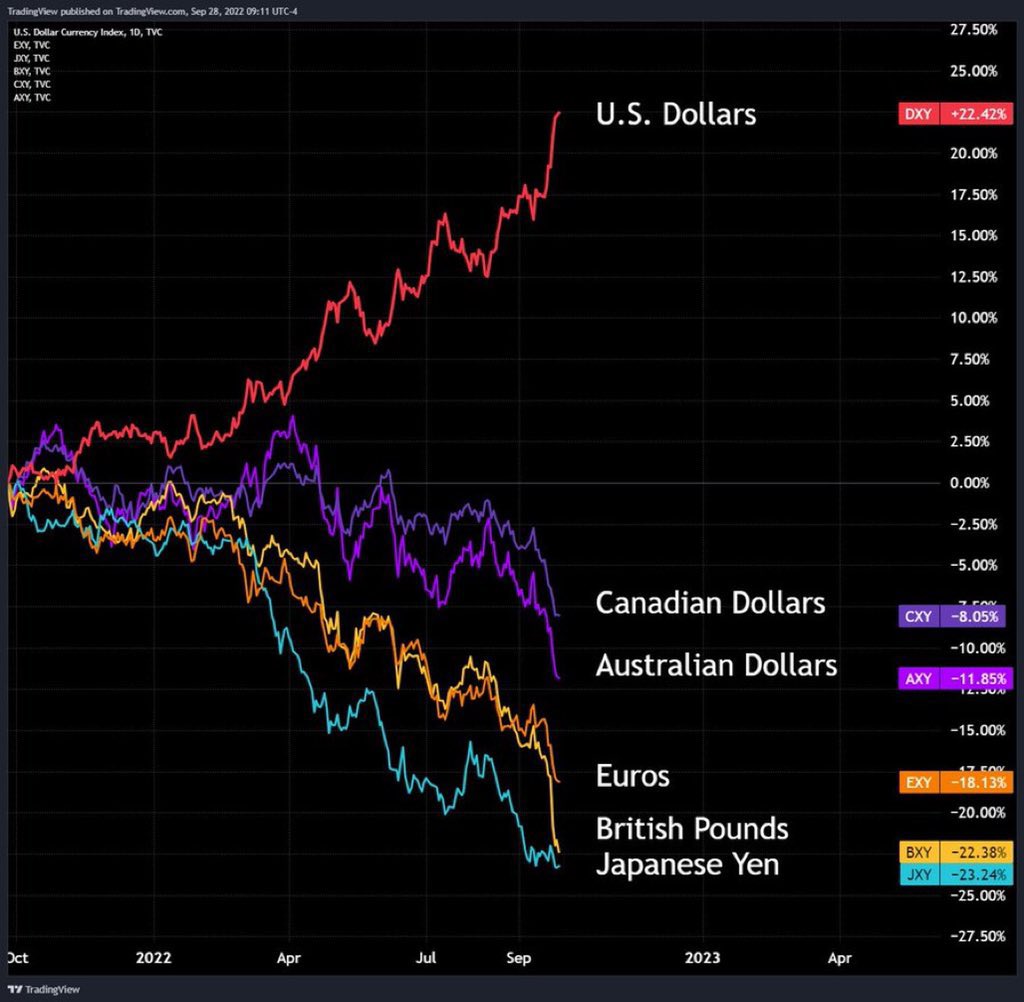 So when does this end?  First, interest rates need to stop going up.  The Fed indicated they’d like to see a 4.25 – 4.50% fed funds rate (with the 2-year yield being almost there already).  So hopefully we’re getting close.

How long do bear markets last and how much do stocks typically lose?  The data is below – if going by historical averages it would suggest we still have some downside to come.  But each of these environments were different and today is no different.  If inflation can subside that would be a massive help. 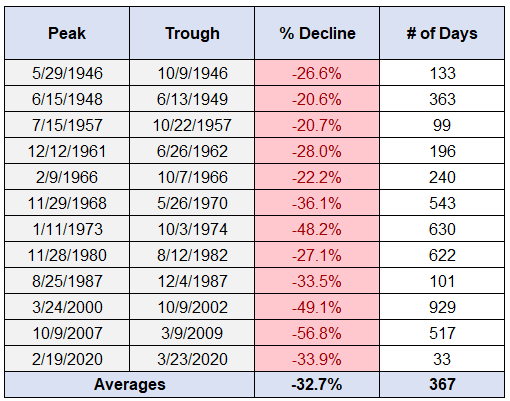 Are there any positives out there?  Absolutely.  Market downturns create lots of opportunity for future upside.  Take a look at some of the future returns in stocks after bear markets. 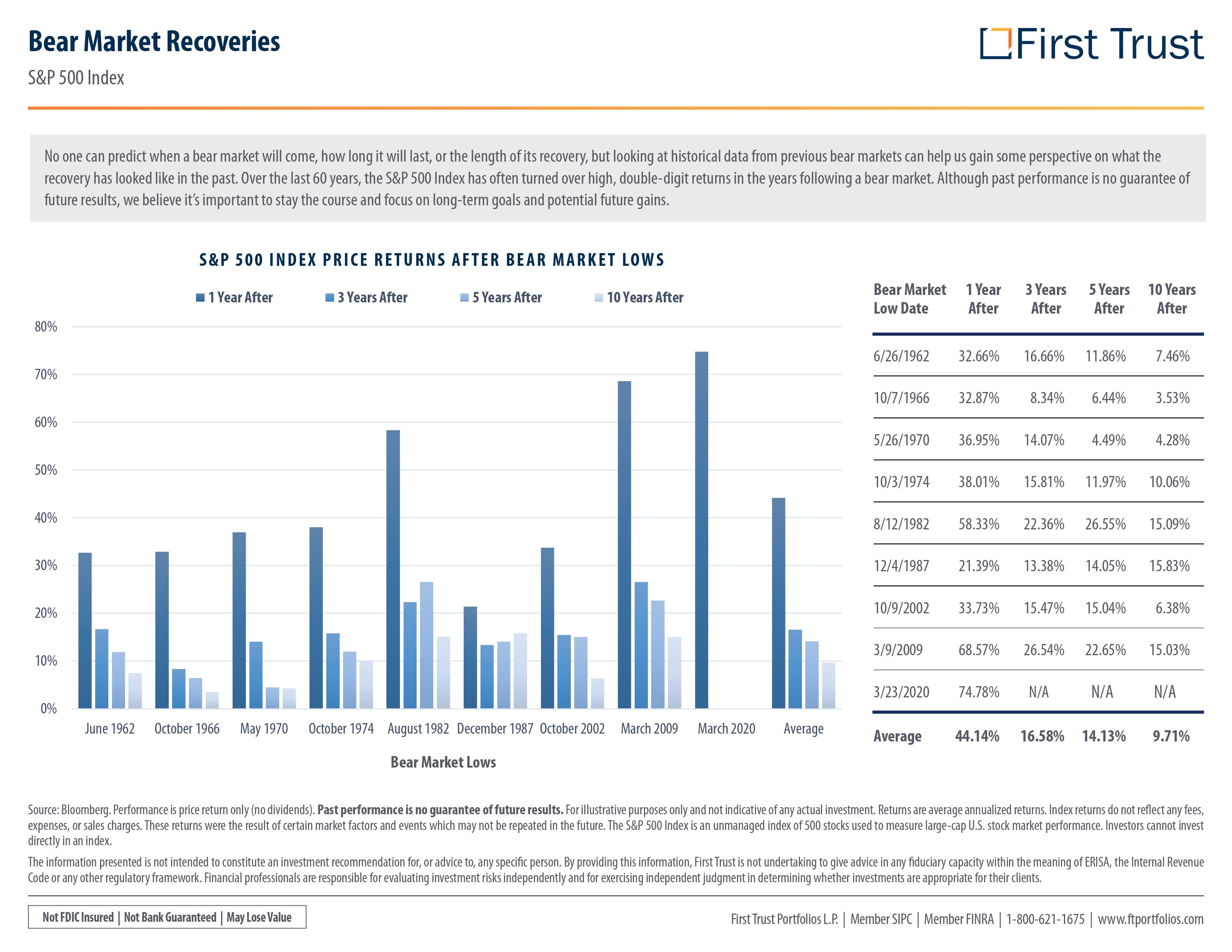 We’re also finally able to earn some yield on savings accounts, CD’s, and other short term instruments used to park cash.  A 1-year US Treasury bond yields almost 4% today and high-quality corporate bonds maturing 3 years or less yield over 5%.  Lots of other opportunities are starting to arise in fixed income as well.  As a former bond trader, the ability to earn a decent return in fixed income again is very exciting.

Lastly, as the value of our portfolios go down, we tend to conjure the worst-case scenario in our minds.  At some point we’ll realize that things are better than we imagined, and those of us who have kept our heads will reap the rewards.

“Stocks are now pricing in endless interest rate hikes, as far as the eye can see, inflation that simply will not abate, a collapse in the capital markets due to more expensive money, a wave of defaults and an epidemic of earnings cuts, layoffs, crashing home prices and energy shortages with a side order of nuclear war. Maybe they’ll be right. If so, the returns on your stocks won’t be particularly important, as we’ll all be crouched in an alleyway with the carcass of a raccoon pressed to our lips, grunting at each other in the darkness while atomic gray ash cascades down from the sky, settling on our shoulders as the dusk of humanity begins.  I’d bet the other way. Things will be bad, but rarely as bad as the worst of our imaginations can conjure. And at the turn, the best and the brightest among us will emerge even stronger than we were before the crisis. Why? Because we will have kept a cool head and made good decisions, not emotional ones.”

Hang in there everyone.  If you’d like to talk talk about your situation or retirement plan, you can schedule a time to do so here.

Is the Bear Market Over Already?